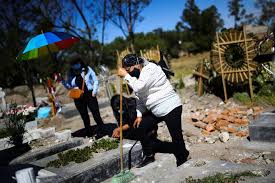 When the coronaviruspandemic reached Mexico a year ago, it kicked off a marathon ofstrenuous shifts for thousands of healthcare and funeral homeworkers in a country that has registered more than 2 millioninfections and 178,000 deaths.
With the pandemic still largely uncontrolled, professionalsin the thick of the emergency are increasingly grappling withthe fatigue, stress and frustration of their daily jobs.
“Many times I cry at night,” said medical assistant TeresaChew, 35, who monitors the lungs of seriously ill COVID-19patients. “People keep coming and they keep dying.”
She has tried to shed the anxiety with running, but it hasnot helped. Over the past few months, Chew said she hasstruggled to sleep and lost hair from the stress.
Adding to the strain, Chew said it is crushing to see peopleshrug off prevention measures such as masks. At least 3,000healthcare workers in Mexico have died from the virus, one ofthe worst death tolls for the medical profession worldwide.
“It makes me really sad… people don’t understand thegravity of things,” she said.
While the pandemic has exacerbated anxiety and depressionfor many, medical workers have been especially hard hit,according to a recent report on suicide prevention from the PanAmerican Health Organization.
At funeral homes and cemeteries, employees are alsocontending with a seemingly endless flow of lost lives.According to a study from the University of Washington, Mexico’soverall death toll from the pandemic could exceed 200,000 inJune.
“It hurts to see so much suffering,” said Marina Carreon,46, who works at a Mexico City funeral home and at times hashelped organize funerals for almost entire families killed byCOVID-19.
Last month, demand for services doubled amid a peak ininfections, and the staff was overwhelmed.
“Suddenly we couldn’t cope,” said Carreon, who began tosuffer anxiety attacks.
Fatigue particularly dragged on industry workers when thedaily death rate spiked late last year, said Roberto Garcia,vice president of the National Association of Funeral Directors.With about 40% of the sector having contracted the virus, fearof infection also runs high, he said.
Grupo Gayosso, Mexico’s largest provider of funeralservices, said it implemented a psychological support programand increased its operational staff by 35% to help alleviate theburden on workers.
For Carlos Cruz, who cremates the bodies of COVID-19 victimsat a public cemetery, taking care of house repairs helps clearhis mind after especially taxing days, when dozens of cadaverscan accumulate at once.
“It is tiring, but I am proud of the work we do,” he said.(

B in Rome - Feb 19, 2021
0
When the coronaviruspandemic reached Mexico a year ago, it kicked off a marathon ofstrenuous shifts for thousands of healthcare and funeral homeworkers...