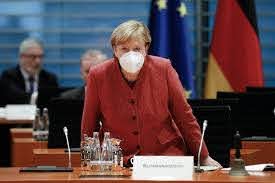 The coronavirus situation inGermany is still very serious even though infection numbers arenot rising so fast, Chancellor Angela Merkel said on Tuesday,after federal and state leaders postponed until Nov. 25 adecision on further lockdown measures.
Merkel said she would have preferred to have agreed stricterrules at a meeting with federal and state leaders on Monday,adding she was very worried about the uncontrolled spread ofcoronavirus in some places, including the capital Berlin.
“Infection numbers aren’t growing exponentially anymore, butare still far too high. So we have to reduce contacts, reducecontacts, reduce contacts,” Merkel told a business eventorganised by the Sueddeutsche Zeitung daily.
The number of confirmed coronavirus cases rose by 14,419 ina day, data from the Robert Koch Institute (RKI) for infectiousdiseases showed on Tuesday, while the death toll rose by 267.The rise in the number of cases was less than the 15,332reported a week ago, but the death toll jumped from 154.
Merkel noted that about 30-40% of the German population werevulnerable, including elderly people and those with underlyinghealth conditions.
“Getting the pandemic under control is the best solution forthe economy, too,” she said.
Germany imposed a month-long “lockdown lite” on Nov. 2 torein in a second wave that is sweeping much of Europe. Bars andrestaurants are closed, but schools and shops remain open.
Merkel had proposed additional measures including making itmandatory to wear masks in schools and shrink class sizes, andurging citizens, and children, to limit social contacts to onehousehold or friend.
Merkel reiterated that the seven-day incidence of the virusmust fall below 50 per 100,000 residents before seriousre-opening can be contemplated. Germany currently has 141 casesper 100,000 residents, according to the latest RKI figures.(