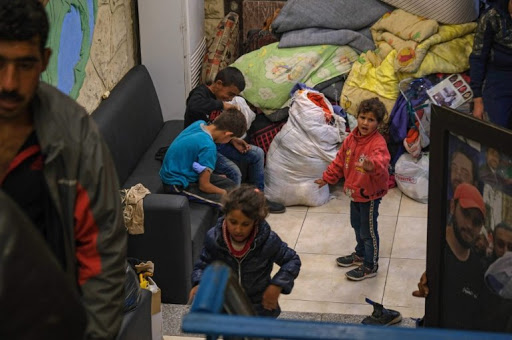 Life in Lebanon has become sodifficult for Syrian refugee Ahmad, he says he recentlycontemplated suicide.
The 54-year-old father of three cleans shops at a mall inexchange for rent-free accommodation in a cramped room in thetown of Daraya, southeast of Beirut. His daughters sometimes gointo the street to sell tissues to help keep the family fed.
An amputee who lost a leg while working at a stone factoryin 2014, Ahmad clings to the hope of being resettled in theWest, saying he can never return to the home he fled in Syriaeight years ago as fighting raged around it.
“I have become a burden on my daughters,” said Ahmad,sitting on a mattress on the floor at his home, paint peelingfrom the walls and the smell of sewage hanging in the air.
“I weep every day, I am crushed. It’s a life of misery.”
Nearly a decade since Syria’s war began, neighbouringLebanon still hosts some 1 million registered Syrian refugeesfor whom life has only become more difficult since an economiccrisis erupted last year.
Poverty among Syrian refugees in Lebanon is soaring,reflecting deepening hardship among the entire population.
The proportion of refugees below the extreme poverty line ofless than $3 a day climbed to 88% this year from 55% last year,UNHCR said.
The situation was exacerbated by the COVID-19 pandemic.Daily labour upon which many refugees depended has dried up.
Ahmad’s nephew, who once helped out with financial support,went back to Syria this year as he could no longer find work.
Ahmad says he cannot follow him, citing security fears. Hewants to go to Canada or Germany. He says assistance he oncereceived from aid agencies dried up around three years ago.
The situation facing refugees in Lebanon has beendeteriorating steadily since 2013-14 as Lebanon’s troubles beganto hit them and any savings they brought with them were used up,UNHCR representative in Lebanon Mireille Girard said.
But now, almost all refugees are below the survival line,she said. “This is dramatic, this is very serious.”
“People have the impression that the future is closing downon them and don’t see light at end of tunnel,” Girard said.
“The situation is very serious and at this moment we reallyneed everyone to mobilise … toward supporting the mostvulnerable as much as possible.”(