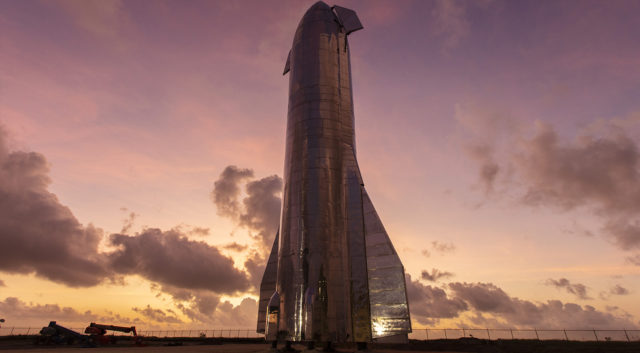 Elon Musk’s SpaceX was set tolaunch a prototype of its Mars rocket Starship in itshighest-altitude “hop” test from the space company’s Texasfacilities on Tuesday, a key trial for a rocket system that Muskhopes will land humans on the moon and eventually Mars.
Musk sought to tamp down expectations for Starship’s firstsuborbital flight using three of its new Raptor rocket engines,predicting a 30% chance of success in reaching an altitude ofmore than 40,000 feet. That would be vastly higher than thevehicle’s first two tests at altitudes of 500 feet.
“With a test such as this, success is not measured bycompletion of specific objectives but rather how much we canlearn,” SpaceX said on its website Monday.
Starship, a rocket system standing 394 feet (120.09 m) tallwhen mated with its super-heavy first-stage booster, is designedto carry humans and 100 tons of cargo to the moon and Mars. Itis the space company’s planned next-generation fully reusablelaunch vehicle, the center of Musk’s ambitions to make humanspace travel affordable.
SpaceX has carried out two hop tests this year usingrudimentary, single-engine rocket prototypes at its Boca Chica,Texas, launch site. Those prototypes launched about 500 feetinto the air and landed on a concrete slab roughly a minutelater.
Tuesday’s planned flight is a major advance for Starship,putting to the test the rocket’s aerodynamic design at altitudeshigher than commercial airliners typically fly. Such heightswill test how Starship returns back to its landing pad, carryingout a “landing flip maneuver” mid-air before touching down.
SpaceX had originally planned to fly Starship at an altitudeof 50,000 feet, but changed the target to 41,000 feet in itslaunch application with the U.S. Federal Aviation Administrationlast week, according to a person familiar with the filing.
SpaceX, which said its launch schedule is likely to change,has launch opportunities all day Wednesday and Thursday shouldTuesday’s attempt be delayed, according to filings with the FAA