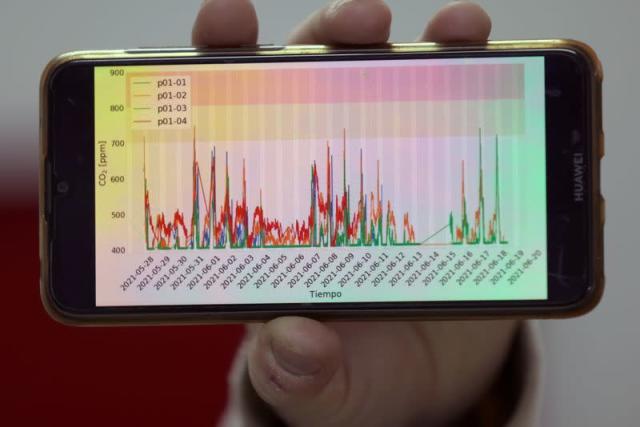 Chilean researchers haverepurposed a carbon dioxide detector model to warn of the riskof contracting COVID-19 in enclosed spaces.
The prototype measures air pollution which, in a room withpeople, would include the coronavirus if anyone was infectedsince it is known to circulate via exhaled vapor.
The device, which is not yet for sale, uploads data to thecloud and issues an audio alert if ventilation is insufficientthat could result in COVID-19 transmissions.
The monitor, developed by the University of Chile’s Centerfor Mathematical Modeling and Center of Excellence inAstrophysics and Technologies Related, is already being testedin university campuses in the South American country.
“If you are in a place that does not have combustion, theonly source of CO2 is people,” Ricardo Finger, an electricalengineer at the University of Chile, said in an interview.
“But if you measure the amounts of CO2 in the air, you canestimate how much air one person is breathing that has alreadybeen breathed by another.”
Carbon dioxide concentration, as well as temperature andhumidity levels, are transmitted by radio signals to a controlpanel, which can monitor dozens of sensors at the same time.
“CO2 sensors have been around for a long time, but thedifference is that they had not previously been considered toconfront coronavirus contagion,” Finger said.
“The focus had been given mainly on surfaces, on contact, inwashing hands and it had been ruled out that contagion couldoccur purely by air.”
As Chile enters the southern hemisphere winter, healthauthorities are racing with vaccinations to avoid a spike incontagions as people spend more time indoors with windows anddoors closed